Siachen glacier was a matter of discussions. In 1821, W. Moorcroft passed near its snout and first acknowledged its existence. In 1835 G.T. Vigne approached it from the west trying to reach the Bilafond la, but he never guessed the existence of such a large glacier across the divide. In 1848 Henry Starchy was the first to discover the existence of the ‘Saichar’ glacier and ascended it for two miles from the snout in the Nubra valley. In the same year, Dr. Thomas Thompson also reached the glacier followed F. Drew in 1849-50. E.C. Ryall of the Survey of India sketched the lower part in 1861. But he ascribed to it a length of only sixteen miles. 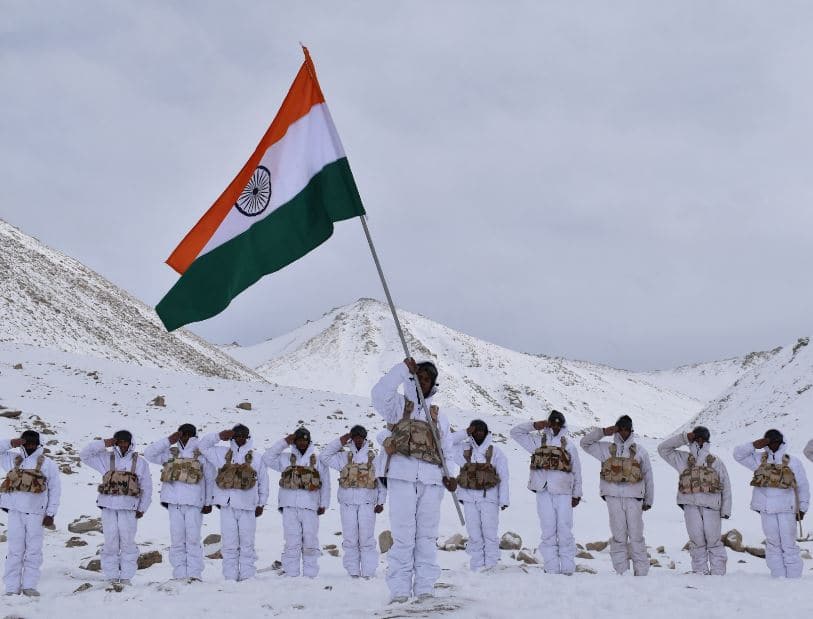 During his famous second Karakoram journey in 1889, Sir Francis Younghusba The next most important explorers to the Siachen glacier were the famous Workman couple, in 1911-12. Fanny Bullock-Workman and William Hunter Workman were Americans who had special interest in the exploration of the Karakorams. They focused their attention on the exploration of the Siachen glacier. They entered the glacier crossing over the Bilafond la and camped on the glacier with a large entourage of porters and two Alpine guides. They climbed many peaks and visited almost all the corners of the upper Siachen. Grant Peterkin was a surveyor attached to this expedition. He surveyed the glacier thoroughly and named a few peaks, particularly Teram Kangri, Apsarasas and Ghent. 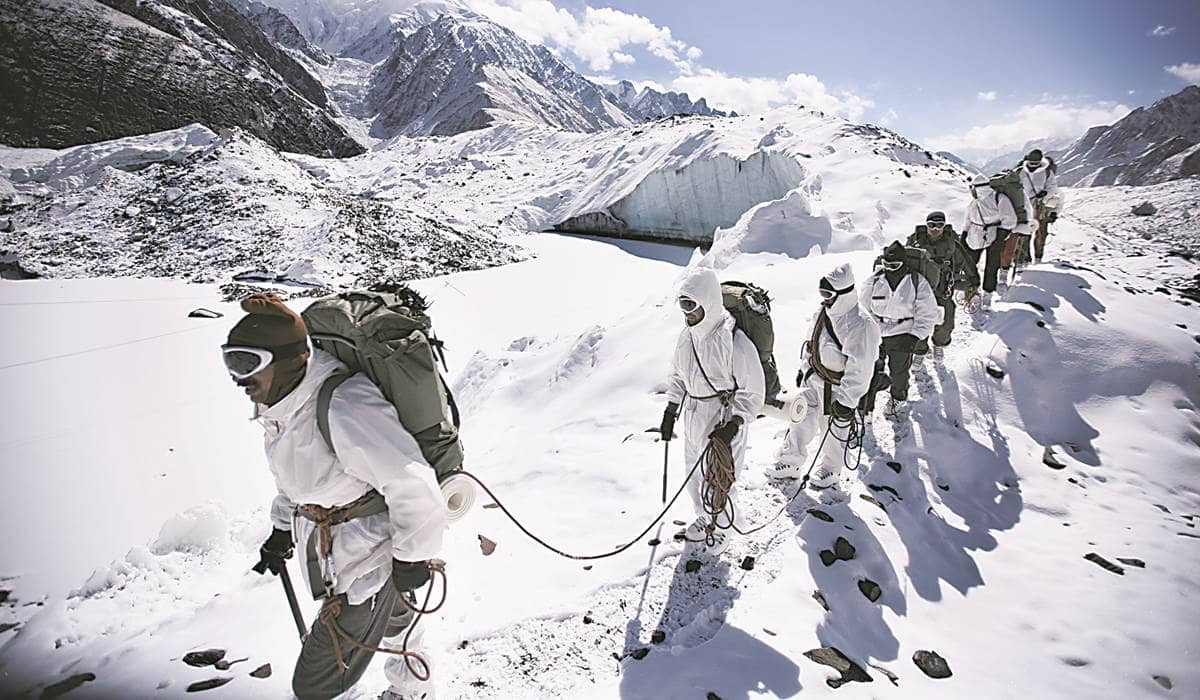 This expedition spent more than two months on the glacier and they visited almost all the major side valleys. Names like Sia la, Junction Peak, Hawk, Tawiz and few others were given this expedition. They also visited and named Indira Col, after Goddess Laxmi.The Second World War put an end to all climbing activities in this area for a few decades. This was followed the turmoil of the Indian Independence and the glacier was left alone for a long time. With the India-China War of 1962 in the east of the Siachen glacier, the entire area was now ‘restricted’, even for the Indian mountaineers and no record of any visits exists. It is known that some parties from the Indian security agencies visited Bilafond la. In the 1971 war Indian troops defeated the Pakistani forces. The Shyok valley in Ladakh was also scene of action. After the war, talks were held in Shimla to sign anagreement about the demarcation of borders. In this “Shimla Agreement”, the ‘Line of Control’ was demarcated till the Shyok river, to what is known as ‘Border Stone NJ 9842’. For the areas to the north of this point, it was agreed that the Line of Control

shall follow “ and thence North to the glaciers’. It was not specified which glacier line will be the border. This ambiguity about exact definition of the border is the reason for today’s conflict. By now maps were published in Europe which showed the extended Line of Control to join the Karakoram Pass in the east, thus surreptitiously supporting the Pakistan claim line to the east of the glacier. This would encompass the entire Siachen glacier, conceding it on maps to Pakistan, forming a long common border between Pakistan and China.

Pakistan gave permission to a Japanese expedition to attempt Rimo peak in 1984. This peak is located in the side valley, east of Siachen. It overlooks the eastern areas of the Aksai Chin. Such an expedition would have firmly linked the western routes with the eastern routes, — the trade route leading to Karakoram Pass and China. The Indian army decided to take action and to prevent such an expedition from proceeding. The first group of the Indian army landed on the glacier on 13th April 1984 to defend the territory and the war on the glacier began, which is still raging today. For the past 18 years now valiant soldiers of the Indian Army defends the heights of this glacier. The altitude, severe winter and harsh weather conditions have taken its toll. Almost 800 soldiers have died on this glacier while more than 12,000 soldiers have been injured, many the harsh conditions. The army has established camps upto 6700 m (22,000 feet) and it takes more than mountaineering skills, even to reach some of the high camps. Soldiers have to cross snow-tunnels, go up almost 700 m (2000 ft) vertical cliffs on jumars and go across huge crevasses over ladders – most of these to be covered in night to avoid being caught in enemy fire. The stay of the army jawans at such altitudes for long periods has changed many notions about man at high altitudes and are adding new chapters to high altitude mountaineering. Many of the camps are supplied helicopters adding up to a staggering Rs. 5 crore  (1 million US $) daily expense.

To help the army several new innovations are installed. Army cannot burn the garbage on the glacier, it cannot be destroyed there or be brought down. At the same time the area has to be defended and the army has to stay there. What should be the solution to this environmental problem ? Rose plants, which are strong and grow near the snout have also suffered. The Glacier war has taken a heavy toll of men and material on both sides. It is almost an impasse and no side seem to be gaining in anyway. Perhaps now the time has come to consider ways and means to end such an stalemate. One of the ways this glacier can be saved is declaring it as a ‘Siachen Peace Park’. 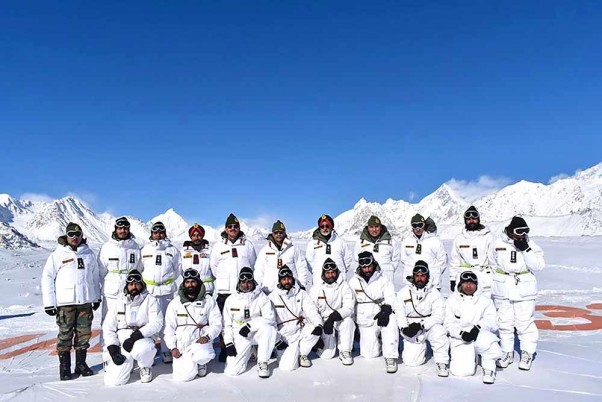 The 1996 Atlanta Olympics has adopted the theme, ‘Power of the Dream’. This is a matter for Governments of India and Pakistan to consider. IUCN can act only if both the sides desires peace and intervention. As a mountaineer and lovers of this glacier we can hope that it will be realised that some steps are required to conclude this never-ending war and save the glacier from destruction. It is hoped that powers-that-be will listen to the anguish of the glacier and soldiers serving on it. We can only ask questions which both governments must resolve.

PM Modi says Lockdown 4 will be different with new rules

Wed May 13 , 2020
Siachen glacier was a matter of discussions. In 1821, W. Moorcroft passed near its snout and first acknowledged its existence. In 1835 G.T. Vigne approached it from the west trying to reach the Bilafond la, but he never guessed the existence of such a large glacier across the divide. In […]